Life is a race. For 5ft 1inch tall Tobi Amusan, small is smart, short is sharp. Out on the track, heart in the mouth, Amusan clenched her teeth as the starter pistol pointed skyward and the metallic voice boomed over the stadium loudspeakers, “On-your-marks (moment of decision), s-e-t (heart pounding), GO!” It was the last order she obeyed before racing from obscurity to immortality.

Amusan knew where the gold was, and she fled towards it, dusting a field of champions to smash the 100-metre hurdles world record in the semifinal at 12:12, racing again 90 minutes after to snatch gold in the final.

It was an unbelievable fairy tale. And Amusan wept!When the electronic board beamed her victorious name after the final race, last Sunday, and the hysterical commentators were shouting themselves hoarse that Nigeria had done the unimaginable by winning gold at the World Athletics Championships for the very first time, an overexcited Amusan inadvertently put the records straight by thundering, “God did that!”

Amusan didn’t hear the commentators, but she heard the spectators’ maddening scream at the Eugene campus of the University of Oregon stadium, USA, which she had set on fire: Nigeria was on all lips, though her 12:06 time wasn’t wind legal.

In her patriotism, Amusan didn’t complete her ‘God did that’ sentence with what millions of Nigerians suffering under the crushing weight of government ineptitude back home would love to hear, “Not Nigeria!”

Clearly, God did that, not Nigeria. Without tangible assistance from the Nigerian government to her evolution, Amusan had set a world record in the semis, won gold in the final, and humbly announced that, “God did that,” to put the records straight. She never lied, Nigeria did nothing.

Before the 25-year-old climaxed on the global stage, the faithless Nigerian nation had abandoned her to an injury, thinking she was fateless.Had any of the two American athletes, Alia Armstrong and Kendra Harrison, that qualified for the finals, won a medal in the race, the world would, perhaps, have heard, “God did that! God bless America!” Why don’t Nigerians pray for Nigeria?

Speaker, Nigeria’s House of Representatives, Olúfémi Hakeem Gbàjàbíàmílà, is a not a quarter miler but he ran to Cambridge, Massachusetts, where one of the best private universities in the world, Harvard, is located.

Specifically, Gbàjàbíàmílà went to a school in Harvard University, Harvard Kennedy School, to study when about 90 Nigerian public universities had been shut down for many months, owing to intractable industrial dispute between lecturers and government over welfare, infrastructure and funding.

According to a unique website, yorubaname.com, the name, Gbàjàbíàmílà, means “one who, while fighting, pretends to be separating a fight.” Breaking down the name into morphemes, the website states, “Gba: take on/ ija: fighting/bi: like/a: one who/mi: is/la:separating.” Gb-à-jà-bí-à-mí-là! The website also says the name is common in Ijesa land.

Not a few Nigerians would swear that to survive at the nation’s House of Representatives since 2003, and emerge as Speaker in 2019, takes more of jiggery-pokery than patriotism. But I disagree.

In fact, Gbàjàbíàmílà’s golden cup has been overflowing with the sweet water of politics at the House of Reps for 19 unbroken years.

However, like a toddler who, out of excitement, sleeps in his Christmas shoes and clothes, Gbàjàbíàmílà was so hyperexcited by his visit to Harvard, and was dying to flaunt it in the faces of frustrated Nigerian students, parents, guardians and lecturers, notwithstanding the ongoing ASUU strike.

So, Gbàjàbíàmílà needed to burrow into the guile that defines his name, and find a subtle way of announcing to Nigerians that he was at Harvard – without attracting a backlash, hence he tweeted a homily, “Back to class. In a leadership course at @Harvard@Kennedy _School. Forget the number of grey hairs, one is never too old to learn, broaden or sharpen your skills.” Apparently, he had expected to be drowned in a flood of likes and positive comments for his tweet, and would have smiled smugly to himself, relishing the way he had manipulated the masses, if someone had written, “Gbàjà goes to school” or “Gbàjà lokan.” But upon reading the advisory of the Rt. Hon. Speaker, the hot air from the nostrils of angry Nigerians was so strong that it blew the tortoise from the top of the high coconut tree, and it crash-landed to the hard ground, on its back. Alas, the overexcited child had urinated in his Christman clothes!

Harvard wasn’t the first stop for Gbàjàbíàmílà in his foreign taste for leadership skill acquisition. He had attended leadership courses at other Ivy League institutions like Stanford, Cambridge and Oxford, piling up certificates like mothers of yesteryears neatly piled up chinaware on cupboards and wardrobes without using them.

If the knowledge in Gbàjàbíàmílà’s great certificates had been shared with fellow lawmakers, perhaps, the All Progressives Congress Majority Leader, Alhassan Ado-Doguwa, would not have brought his four wives into the hallowed chambers, introduce them publicly, and later gleefully announce that he has 28 children from the four wives, and was going to round them off to 30 before 2023!

Mr Speaker, Nigerians know that Ado-Doguwa, like you, had used public funds to attend many leadership courses home and abroad. Nigerians, (not including me o), wonder that with the kind of legislature you lead, flying to foreign universities for certificates is money down the drain, and should be stopped.A few Nigerians, including me, believe politics and religion are the pair of handcuffs that shackles the nation and her progress.

While Speaker Gbàjàbíàmílà was cunning on the way he announced his Harvard ego trip, the General Overseer, Omega Fire Ministries, Apostle Johnson Suleiman, displayed brazen spiritual recklessness when he gushed last year that he wished COVID 19 would continue because he bought his third jet during the pandemic.

Suleiman had gloated, “In COVID, I bought a jet, the third one. I have three; I was praying for COVID-19 not to end because I was resting. While some people were complaining, my wife asked, ‘Can life be this sweet?” Is that a man of God? I share the same geographical heritage with Gbàjà having been born and bred in Lagos. Also, I love my mom like Gbàjà loves his mom, Alhaja Lateefa Olufunke Gbàjàbíàmílà, but I won’t fly my family and friends to Dubai, like Gbàjà did, to celebrate his mom’s 90th birthday. This type of spending is the reason the tissue paper has become more valuable than the naira.

Mr Speaker, for those that lamented because you bought a G-Wagon for your wife, Salamatu, on her 50th birthday, four years ago, I’ll advise you to ignore them; they’re the victims of the dehumanising system your party, the APC, and the regime of the worst leader in Nigeria’s history, Major General Muhammadu Buhari (retd.), created.

Thankfully to the APC national government proudly installed by Asiwaju Emi-Lokan Tinubu, Nigeria, in March, 2022, became the second-highest poverty-stricken country in the world after India, with over 70 million people living in extreme poverty, according to the World Poverty Clock, an online tool that provides real-time poverty data.

Though Buhari is the President of Nigeria, the Commanders-in-Chief of the Harm Forces are the nation’s terrorism high commands. Nobody takes Buhari seriously anymore because of his countless broken promises and empty threats. Nobody reads the Federal Government’s stories anymore, but people read Boko Haram and ISWAP’s stories, and they take them seriously.Terrorists have vowed to kidnap Buhari. If they do, where’s Nigeria going to get money to pay them, given the emptiness of the national treasury? Well, sport is a veritable foreign exchange earner. So, let’s develop future Amusans, Israel Adesanyas, Victor Osimhens etc and get ready.

Terrorists talk and do. 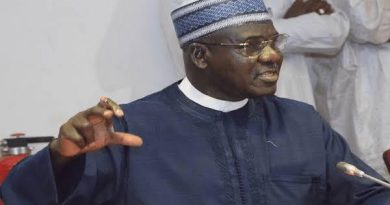 Buratai: When Misfits In PDP Awake From Slumber 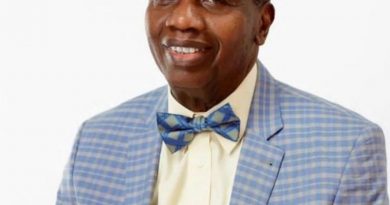