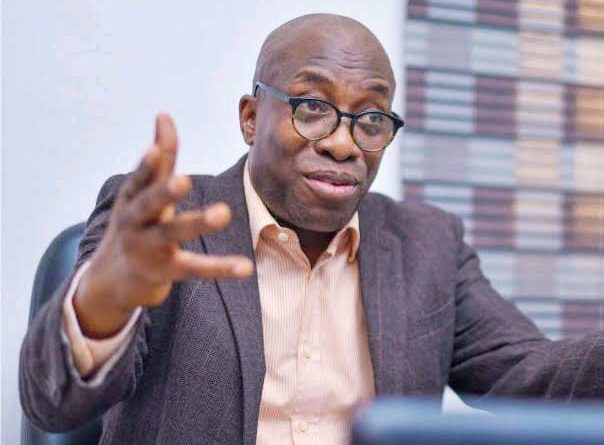 Within Nigeria’s political landscape where critical issues of governance and driving development with sound political philosophy have been discussed, Segun Sowunmi’s contributions have resonated loudly. His quality personality has established him as one of the nation’s fast rising young politicians.

No doubt, several stakeholders admire his posture as an astute political image
maker, considering the courage, smartness and brilliance he exhibited when he served as the spokesperson for the 2019 Presidential Campaign of former Vice President, Alhaji Atiku Abubakar, the candidate of the Peoples Democratic Party, PDP, in the presidential elections.

Those who followed the trajectory of the energy sapping assignment would quickly realize that his loyalty, devotion to duty and unbridled patriotism remained very legendary. Today, everyone can attest to the fact that Segun Sowunmi, indeed, discharged his assignment as Atiku’s spokesperson with intent to leave positive imprints on the sand of history.

The above narrative may have described his current disposition and status well.
Unknown to many, Sowunmi was based in Europe, where he engaged in strategic
business consulting in London and Germany. He also led an exiled group that worked underground in tandem with the National Democratic Coalition, NADECO. He was also a member of the “Third Force,” which contributed immensely to developing position papers for key pro-democracy leaders during the struggle for democracy. All along, he never lost touch with all democratization efforts and peace process.

Truly, it takes only a brilliant man with deep patriotic inspirations like Sowunmi, whose idea is sufficiently powerful to douse numerous tensions between the government and the very critical public. In 1996, an opportunity came for him to
display the creative prowess of his ideas on effective government-civil society engagement relations issues, putting our peculiar situation at that time into considerations. It was at this time that his pan-Nigerian attribute came to the fore, when he eloquently identified and advised the then government against four monsters that would obviously drag the nation into a dangerous bend in the quest for democracy.

He spoke of excessive militarization of politics, excessive politicization of the
military, excessive unionism and excessive civil society campaigns.

Sowunmi spoke like an oracle and coined the phrase “brainless radicals” to describe those who would use the instrumentality of excessive socio-political and economic
radicalism to push the nation into this tight corner.

Today we are living witnesses to this turn of event. All through 1996 till the end of the military interregnum, Sowunmi held the record as the only UK-based young Nigerian to enjoy high profile invitations to corridors of powers to discuss and contribute to sensitive national issues. He saw power, fame, and wealth and yet, he conquered them all, because his quality personality, business success and family
background provided all these ab-initio.

At this young age, he was quick to realize that democracy should be “people-centered” and not a system that can be imposed on people through radical means.

Thus, in his believe to propagate and promote public awareness and civic
engagements as the two of the most important conditions for a truly democratic
society, he mooted the idea of the “Thinking Club” to serve as a hub for young
emerging leaders to galvanize useful thoughts on how citizens should be informed of the policies of governments, and how they must engage with these governing structures, thereby framing political participation and effective representation as cornerstone of democracy.

In 2002, in an exclusive interview published in the Nigerian Tribune of September 28, Sowunmi, like an oracle, expressed his candid views on issues bordering on nation building and, most importantly, on the misunderstood concept of generational change.

On the state of the nation, he said, “I have not been able to concentrate on anything apart from trying to find out why Nigeria as a nation is not just working; and if you ask me what do I really want, I will tell you sincerely that all I want is that we should start to call ourselves together as young people, figure how to have a thinking club and start thinking for some of these our parents so that when problems crop up, the Club can quickly gather ourselves together, think up realistic and sane solutions and give to them.”

With the above statement, he has succeeded by internalizing late Chief Obafemi Awolowo’s work ethics. The above statement shares so much with the immortal words of the late sage, who once said, “I have never regarded myself as having the monopoly of wisdom. The trouble is that when most people in the public life and in the position of leadership are spending whole days and nights carousing in clubs in the company of women of easy virtues, I, like a few others, are always at my duty post, working hard at the country’s problems and trying to find solutions to them. Only the deep can call to the deep.”

Here, one can see the display of a deep and an uncommon position of a young man in support of a natural process of ‘Elders-Youth’ political mentorship in contrast to the confrontational view of today’s young political rebels, who have embraced vague ideas about generational change and distorted the meaning of young people’s role in political governace.

On several critical national issues, Sowunmi has acquitted himself
creditably as one of Nigeria’s model advocates and a social engineer.
Notwithstanding the wide-ranging mutilations that governance may have gone through in terms of meaning, focus and interpretation, Sowunmi’s analysis of national issues are done with vigour and in their true meaning.

Today, Sowunmi is a forceful and blunt speaker, who relishes logic and common sense and this is what endears him to everybody. For over two decades, he has worked to earn his current fame and greatness. He has convinced all that he is not just a visionary young leader, but a goal-getter who sees possibilities where others see difficulties.

In all his deeds, he has practically
demonstrated that it is still possible to serve without being stained in the mucky waters of politics. On several occasions, he has passed through the political furnace of fires. He has equally faced tribulations and trials and on several occasions, he has been caught in the quagmire of issues and sometimes found himself at the epicentre of challenging, disappointing and unwarranted criticisms. Yet it is on record that his public reputation has continued to gain advantage within the nation’s power houses of public opinions and among Nigerians in general.

A highly detribalized young man, a bridge builder with quality friends across the
length and breadth of Nigeria, Sowunmi belonged to the class of progressives who see politics as a vocation, rather than a permanent profession. It is therefore not
surprising that providence has finally become generous to him in a very unique
way. The beauty of his recent audacious declaration for the governorship of Ogun State is the colorful nature of the
attendance with outpouring of commendable remarks by various political stakeholders across party lines and the preponderant approval by Ogun State citizens.

The collective advocacy for his adoption as the PDP governorship candidate for Ogun State is in solidarity with his capacity and power of his ideas, creativity and innovation.

According to a political giant in the state, Sowunmi’s entry into the gubernatorial contest has suddenly set the state’s political landscape for a showdown between the people’s interest and the unending politics of deceit, insincerity and dishonesty of the political merchants in the state.

In our polity, where people plot their way to the top with highest level of desperation and using all diabolical means, Segun Sowunmi’s invitation to serve at this auspicious moment is an approval of his ‘People-Centered Approach to
Development’.

It is an opportunity to change the current political architectural pattern of unsustainable development policies and to arrest the political instability occasioned by the existence of strange ideological opinions within the same government resulting in a chaotic environment that slows down or interrupts the right developmental decision-making mechanisms.

As he pursues this noble agenda, we can only wish him well and best of luck

2023: Is RCCG Actually Rooting For Osinbajo?

Should We Still Pray In Nigeria?

Who Nominated Osinbajo For VP?