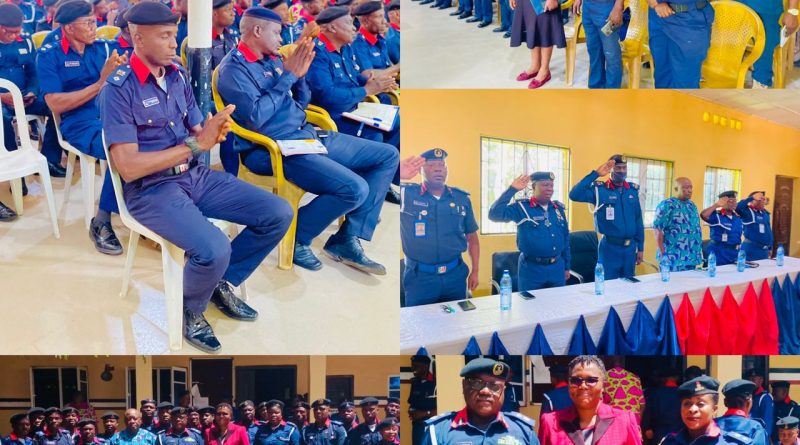 In his continued effort to rejig, reposition, revamp and restructure the Corps, the Commandant General of Nigeria Security and Civil Defence Corps, (NSCDC), Dr Ahmed Abubakar Audi mni, PhD, organised a sensitization and evaluation tour for all Divisional Corps Officers and Peace and Conflict Resolution desk officers across all the Divisions in Osun State Command.

While speaking on behalf of the Commandant General, CG Abubakar Audi, mni, PhD, Superintendent of Corps (SC) Helen Idoko explained that mediation should be used as an alternative to litigation.

Atanda Olabisi, NSCDC Public Relations Officer, Osun State in a statement issued on Monday said she charged the trained officers to justify the confidence reposed in them, by letting the training reflect in the discharge of their duties. Furthermore, SC Idoko charged the participants to exhibit all the qualities of a good mediator by being disciplined, confidential, focused and committed to duties.

She enjoined Peace and Conflict Resolution unit officers to exercise caution while compiling reports adding that the unit must be resolute in finding an acceptable and stress-free, cost-effective alternative to conflict resolution by using Alternative Dispute Resolution (ADR).

She buttressed the area of farmer/herders cases, the Unit and the Agro Ranger Unit should endeavour to work harmoniously together since we are working towards achieving the same aims and objectives.

She thereafter noted in the area of farmer/herders cases, the Unit and the Agro Ranger Unit should endeavour to work harmoniously together since we are working towards achieving the same aims and objectives.Timely forwarding of report to the State Command from the Divisional Offices for an onward transfer to the National Headquarters is very important.

He advised the public that ADR is a means of settling civil cases out of court.

He promised that the the command would ensure that knowledge the participants have acquired would be utilized.

While giving the vote of thanks, the head of Peace and Conflict Resolution Unit, Chief Superintendent of Corps (CSC) Anjorin Oluwakemi lauded the CG for the training and assured him that the training acquired would be put to use while discharging their duties.