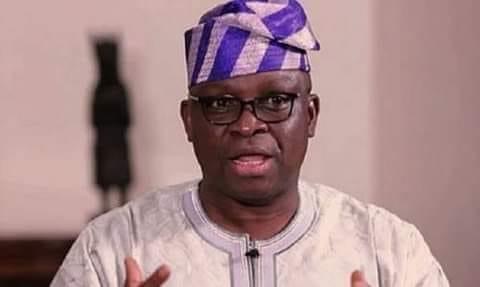 A group of Peoples Democratic Party youths, PDP Youths Congress, PDPYC, has described call by a faceless group that former Governor of Ekiti State, Mr Ayo Fayose be suspended from the PDP and that the Ekiti State Exco of the party be dissolved as the usual talks of deranged minds.

The PDPYC said it was funny that those who either left the PDP in Ekiti for another party or stayed in the PDP and worked against the party during the Ekiti State governorship election are the ones now presenting themselves as saviours of the party in the State.

According to the Convener, Comrade Oluwole Durojaiye, PDPYC, in a release on Sunday, those using the faceless group to speak should rather use their own identity and go ahead to suspend Fayose since they are now the owner of PDP.

When some leaders of the PDP left the party national convention in 2014 and formed nPDP, did heaven fall?

After suspending Fayose, they should also go ahead and on their own, dissolve the Ward, Local Government and State Excos of the party in Ekiti State since that will make them to be able to sleep well.

Rather than this voyage of advertisement of their personal hatred for an individual, to us, questions they should answer is whether anyone of them have won election for PDP in Ekiti State before apart Fayose.

Also, is Fayose not entitled to his opinion on southern presidency? Should his demand for southern presidency and support for Governor Nyesom Wike’s presidential ambition have caused the conspiracy against the PDP and its members in Ekiti State by the National body of the party?

Should those who openly worked against the PDP before and during the Ekiti election be the ones talking about dissolution of the party Excos, with guaranteed four years tenure? So if the party Excos in Ekiti State are dissolved and the Exco members go to court, will that bring the desired peace to the party?

With the coming together of Fayose and Senator Biodun Olujimi to present a common State Chairman, shouldn’t that be a welcome development to genuine lovers of PDP in Ekiti State.